Perth has never looked better than when we took to the city recently to capture some street style. Because who doesn’t love some real-life fashion inspiration!

From pussy bows, bold prints and work-wear chic looks. To an array of fabulous shoes, handbags and casual-wear looks to envy… (and everything in between!) Here’s our fave looks – and a bit of a spiel on why we loved their outfits, in no particular order: 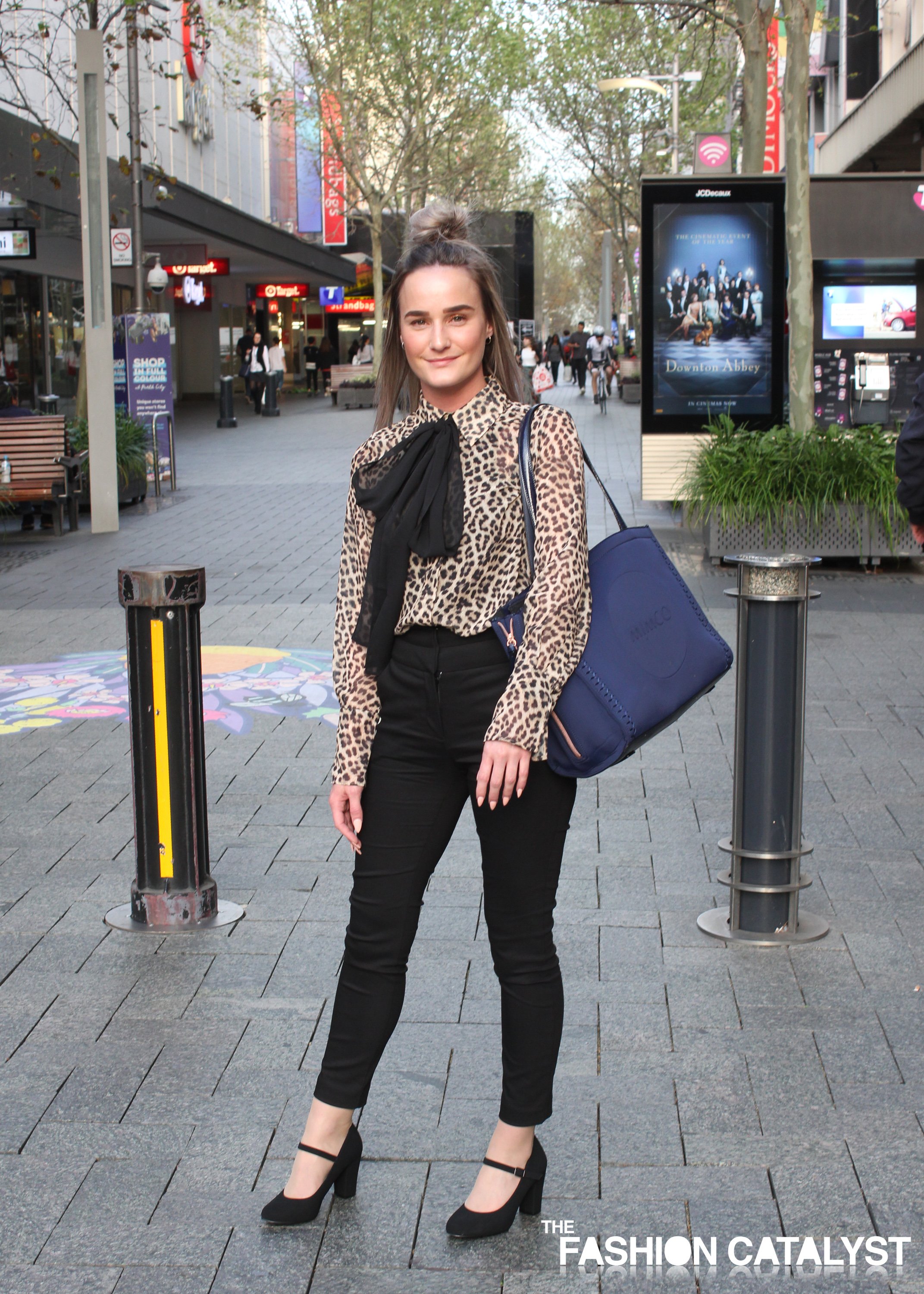 In the above pic, Jessie was captured on her way home from work at around 5pm. To me, she looked as though she’d just gotten ready for the day. From her hair and makeup, to her nails – and everything in between – she looked fresh and fabulous! And that’s precisely why we loved her fashion enough to street style photograph her. Plus, when we had a chat, Jessie said that she’s a lawyer. And any lawyer dressing as stylish as she does on a Monday wins bonus points in my eyes!

Below is Lauren. Can you believe that she was unsure about being photographed? 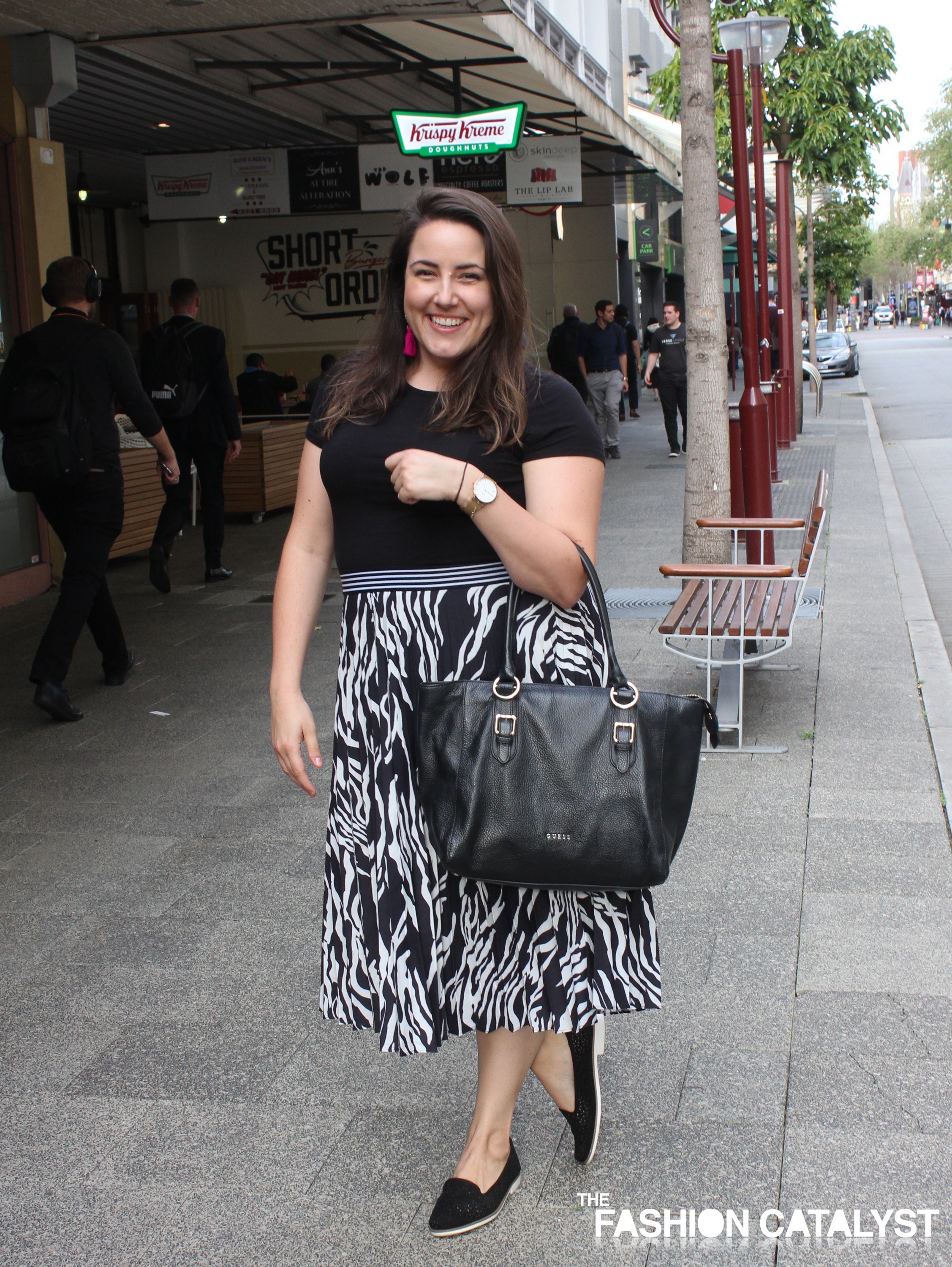 At first Lauren had her hair up and didn’t think that she looked good enough. Umm, can we just confirm that she did indeed look fab enough! And that I was glad to have convinced her to let me street style photograph her. Because her pic is actually my fave from all throughout this post. Why? Because she was a natural in front of the camera. She was so at ease that I literally just clicked away with the camera. No direction needed. And the camera loved her – which made it hard to choose just one image!

Below is another of my fave looks from Hay Street. Okay, they’re all my faves but Alex oozed style as he and Lauren walked across the street together… So it was really a no brainer for me choosing to capture his style. 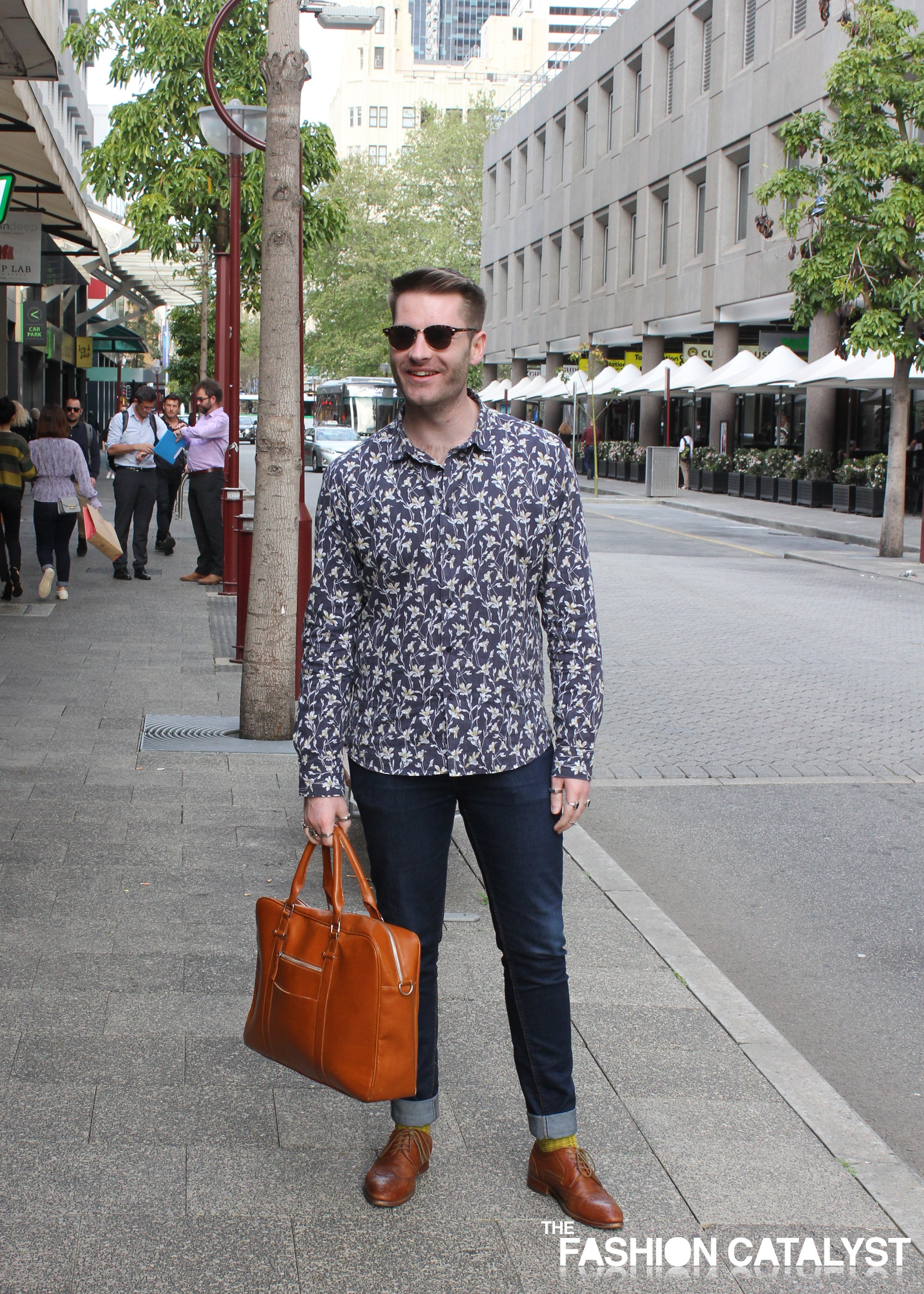 I just love the finer details of Alex’s look. He was cleverly put together, yet he wasn’t over done. Which is how one should always look in my opinion.

And while we’re street style spying great men’s style. Below is Victor Rousné. You know when you see someone in a crowd and you can’t take your eyes off them? Well that’s about how I felt with Victor. Nothing creepy there. But as much as I loved his casual style (his backpack was très chic btw!) – there was just something extra there. Energetic? Perhaps that was it and I could feel his energy. Because it was different… Which made sense when we started chatting and he told me that he’s visiting Perth from the south of France. Ahh, bingo – that was likely it. That familiar French energetic pull. And the very reason I love street style capturing in my home city! 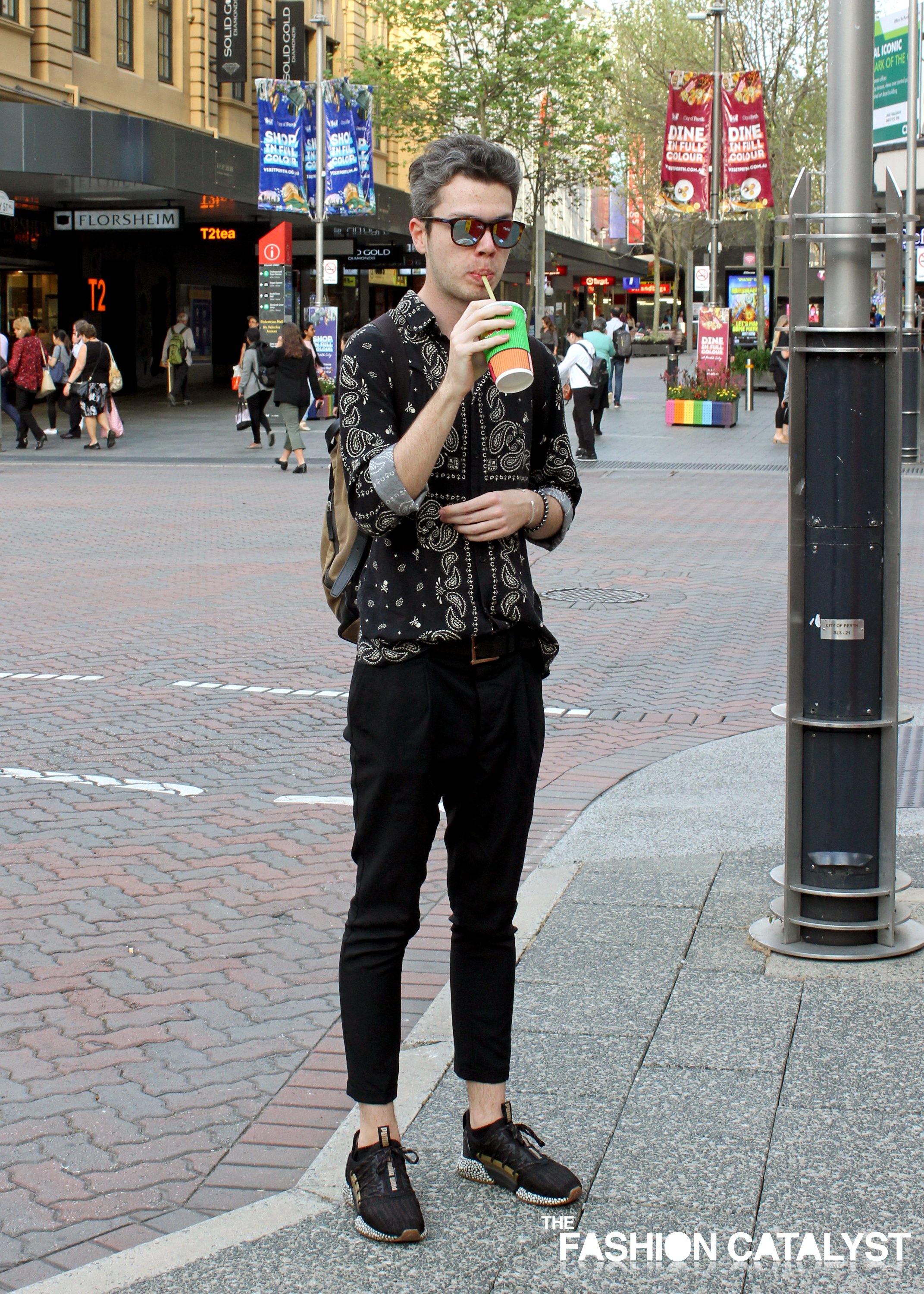 Side note aside, something else that was très chic about Victor was that he’s a fashion design graduate. And a talented one at that! It was really great to meet you, Victor and chat briefly about your fashion adventures. I hope you enjoy your stay here in Western Australia.

Shallom (seen below), was also captured on Hay Street. She again had a great vibe. Model-like in fact. I just loved her look. Because who doesn’t love a great high bun paired back with skinny jeans, sneakers and a collared shirt! 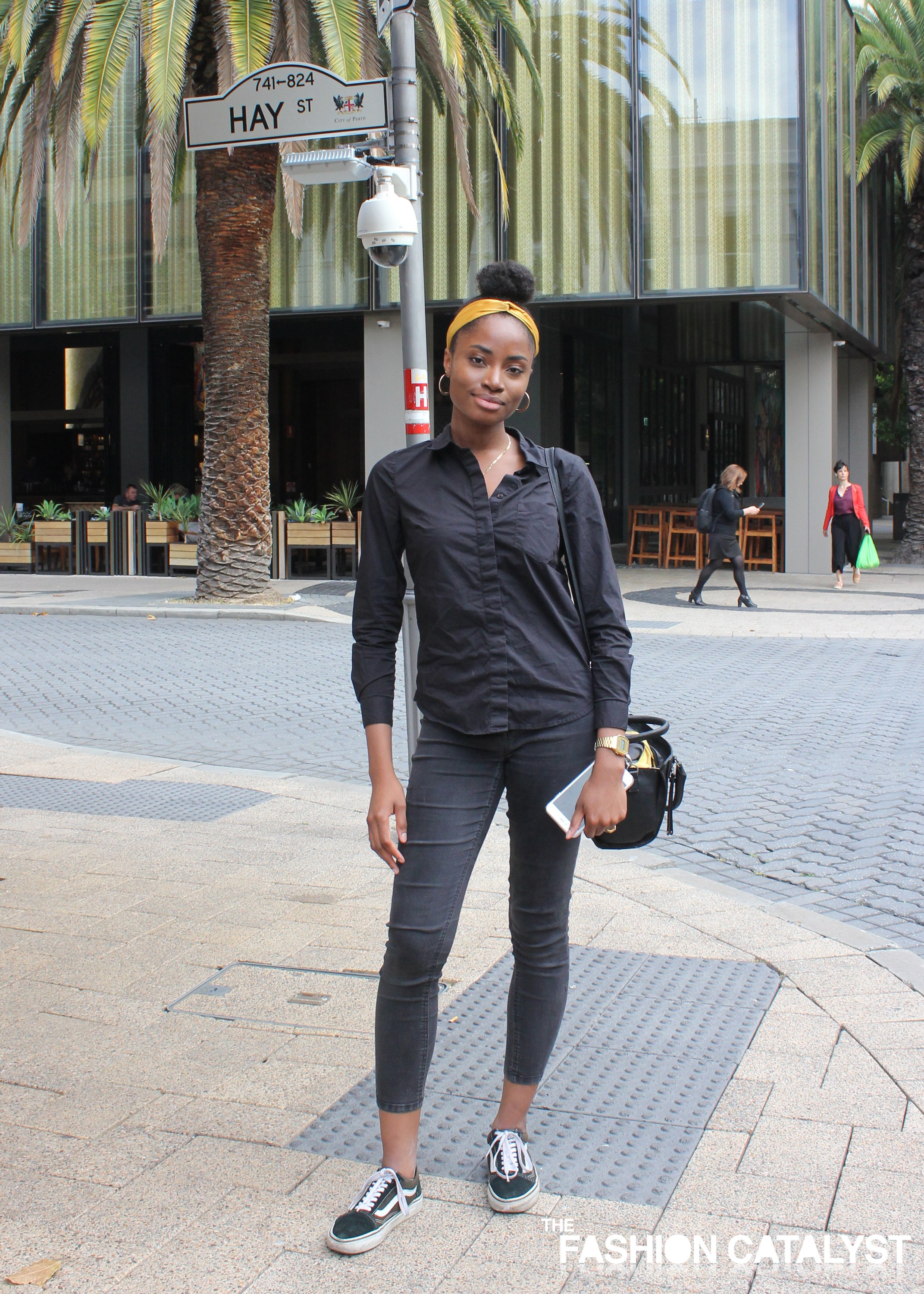 But you might also notice that as I took the above photograph, there’s a lady coming up behind her in a funky outfit. As she got closer, I was still photographing Shallom, but I noticed her shoes (which btw, turns out that she created them herself with some spray paint). And so I chased her up King Street to get her to pose for my camera too! Because at the tail end of winter, on a Monday afternoon in the city, a pop of colour is always a street style favourite. 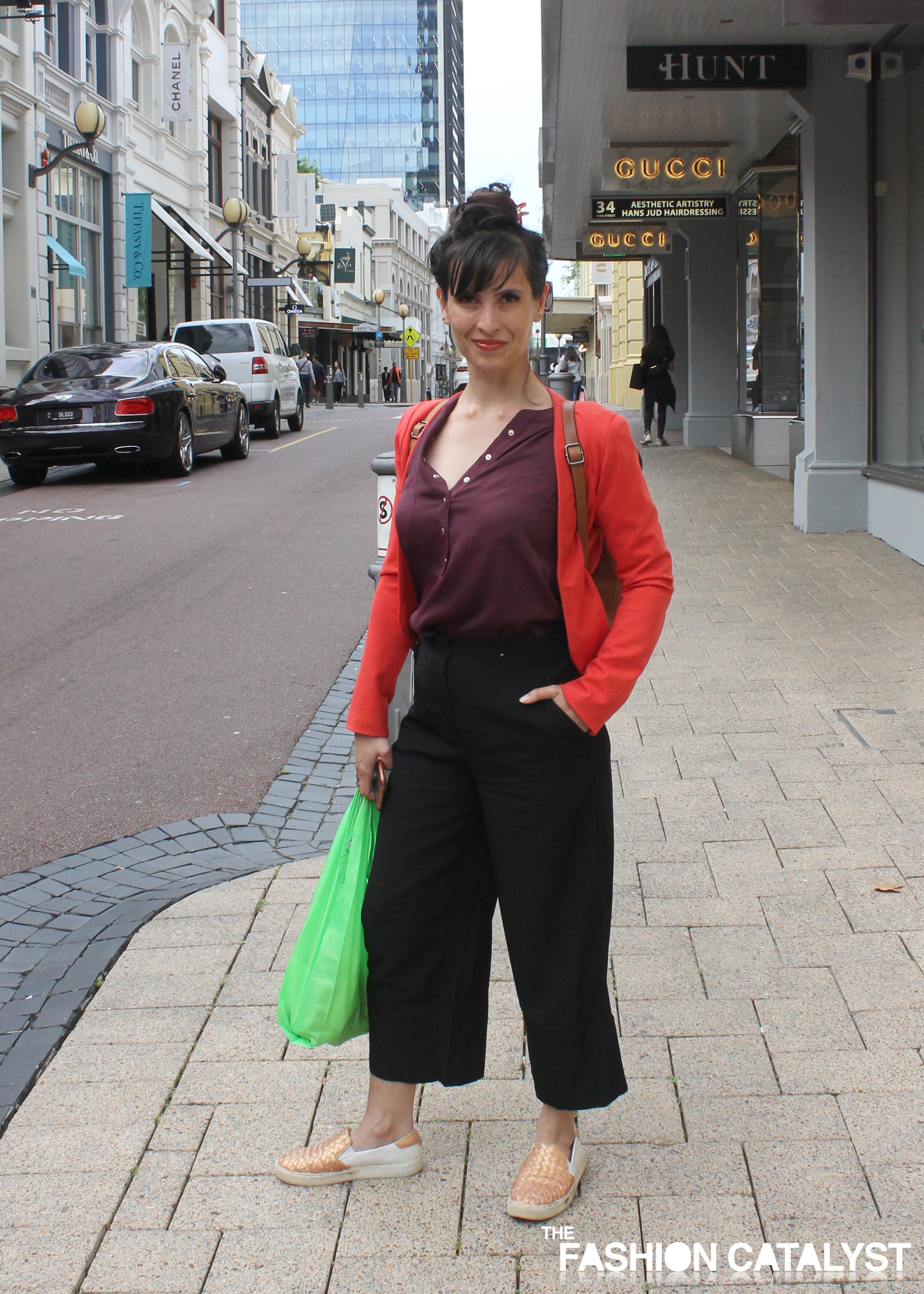 Oh and I loved the neon green shopping bag too. Which, when she advised me that she was ashamed of it because it’s from Woolworth’s or Coles, I retorted with a “BONUS!” Especially given that Prada’s recent neon range would set you back a small fortune in comparison.

And below is Farai and Hannah. To whom I style stalked whilst they weaved in and out of designer store upon store along King Street. And yes, it’s always a bit weird asking total strangers if I can take their photograph. But when I explained to them both that their fashion was on-fleek, thankfully they obliged. 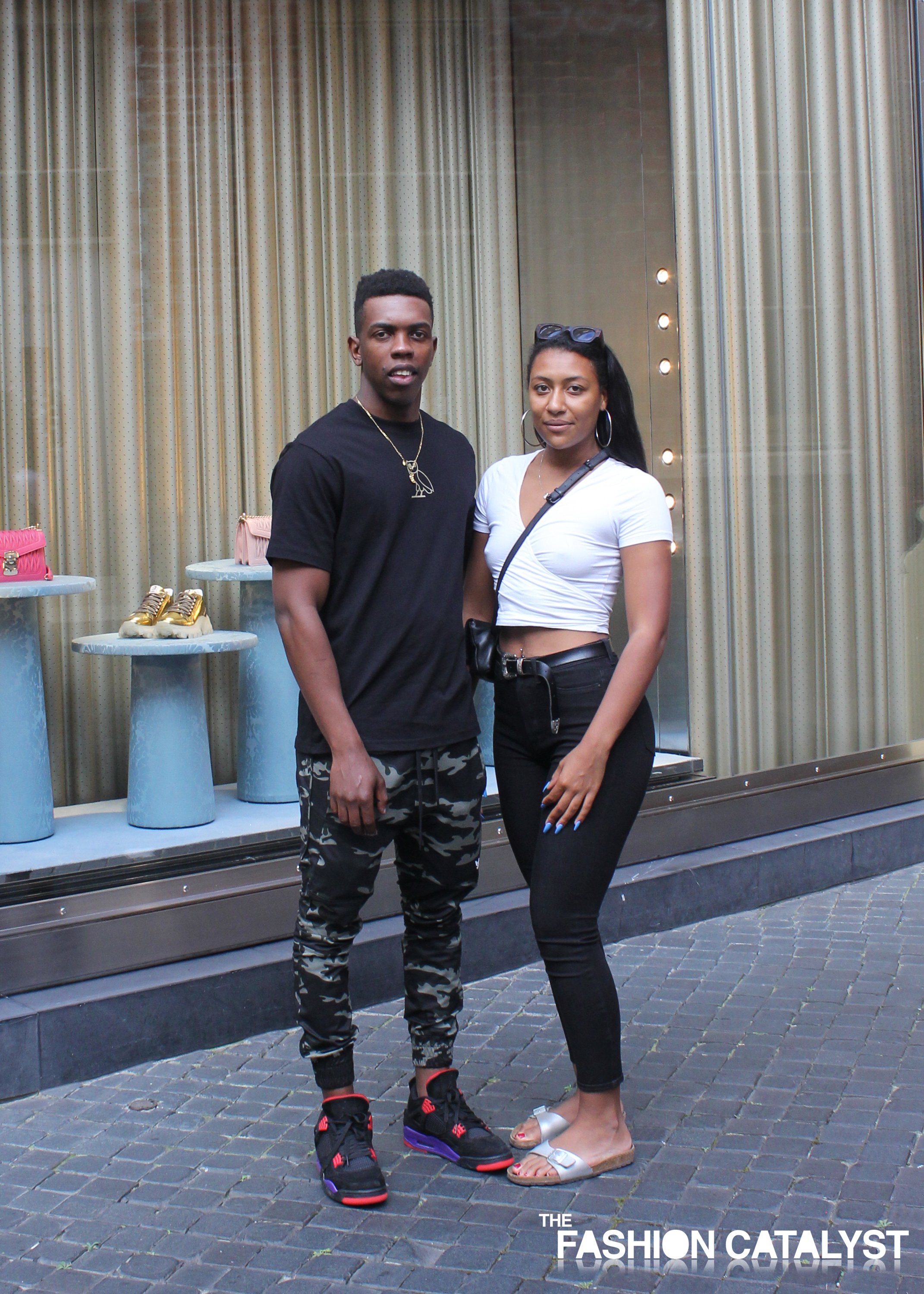 Oh and the same was with Kelly (as seen below). In fact, Kelly was shocked that I wanted to take her pic. Why? I’m not sure. Because I personally love this casual look. It’s cool. And looks super comfortable for a spot of shopping in Perth city. 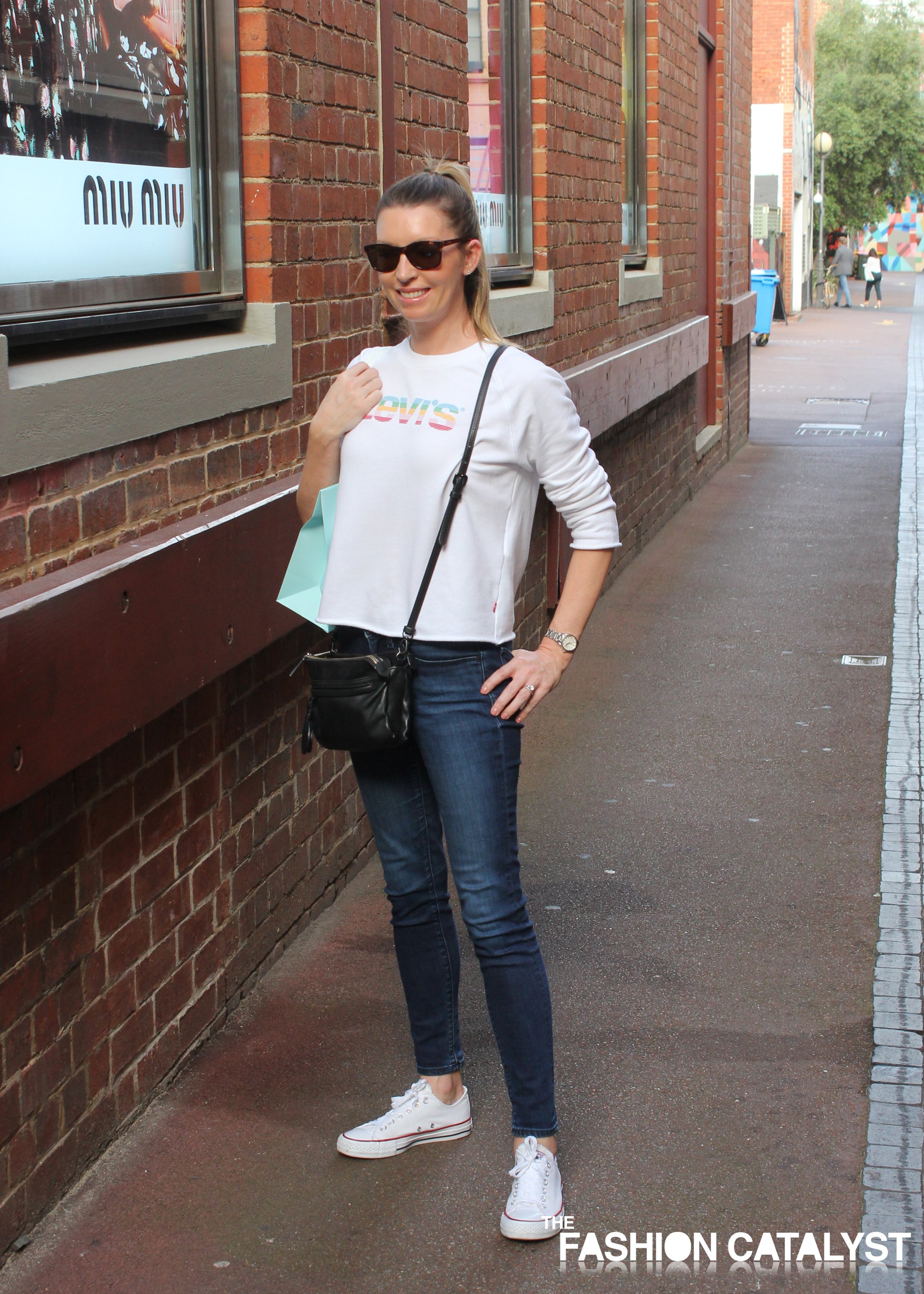 From her nails and coordinating lipstick, to her cross-body bag and forever cool, Vans! It was another no-brainer for me.

And last but certainly not least was Joyce (as seen below). Fortunately I spotted Joyce stylishly sashaying down past Chanel on King Street. And quickly got the lens focused for another favourite Perth city street style look! 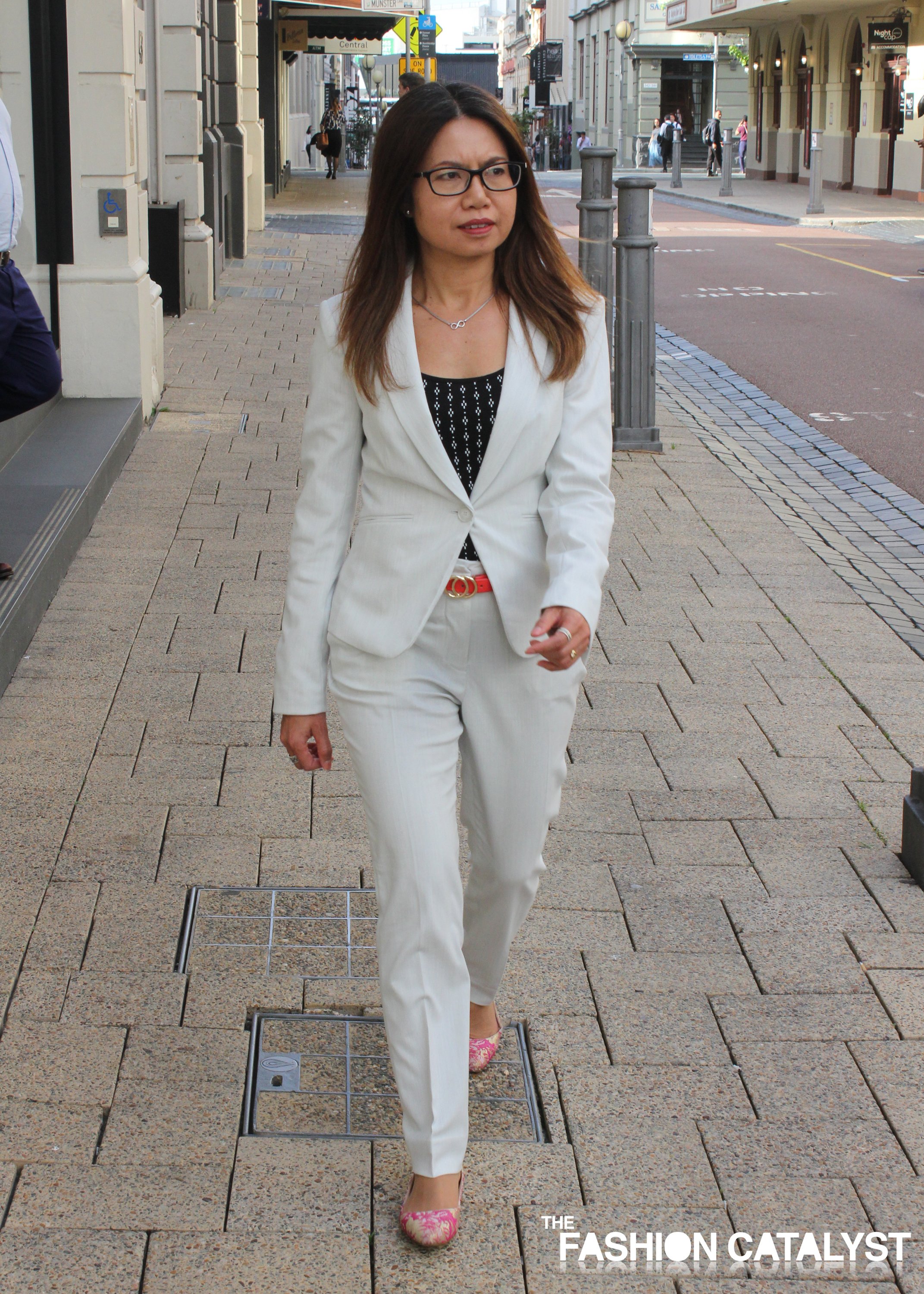 Because who doesn’t love a great power-suit! Especially when it’s paired back with gorgeous accessories.

So, what are your thoughts? Has Perth got some serious style?

Do you spy any favourite looks from the above? Feel free to comment below…