From the sound of the very first gasp of air inhaled into a slightly tilted microphone, it was clear that Katie Noonan was about to take her audience on a journey.

It could be seen in her expression, her composure and her innocent wide-eyed glances. And after adjusting the microphone and setting down her specs on the stage floor, she did just that. 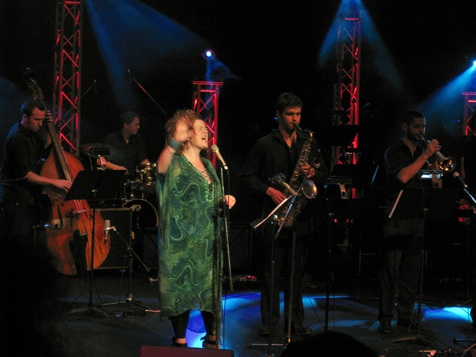 I was fortunate to attend two performances. The first being Katie Noonan: The Music of Lennon and McCartney with WAAPA’s Jazz and Contemporary Music students. Along with the second at ARTBAR. Whereby she was with her husband, saxophonist Zac Hurren and Jazz guitarist Stephen Magnusson forming the trio, Elixir.

Both performances far exceeded my expectations and added to my appreciation for talented musicians.

She projected a comfort on stage as if she were at home – listening and playing her songs which were her way of sharing her private life with us.

She was refreshing and her music was moving! Clearly her voice being the highlight; pure, peaceful and angelic, it carried with it every sentiment of each lyric she sang.

Katie clearly has a gift for writing. Her voice is the instrument by which she could delve into my soul and liberate true interpretation of word and sound. Each song took me on an excursion. Some of which have helped heal wounds. And others that filled my heart with a joy that she radiated herself.

Along with a respect for music – whether being played by her husband’s saxophone, the WAAPA students (who in fact delivered a skilful performance in their own right), or her own fingertips – she exuded contentment. Her face sang even when she wasn’t!

I found myself captivated by her, just waiting for her next tune. She certainly has a presence about her. Even when I spoke with her after the show she was pleasant and graceful. She was obliged and I, just one of her many fans, was gratified.

Everything You Need To Know About Balayage