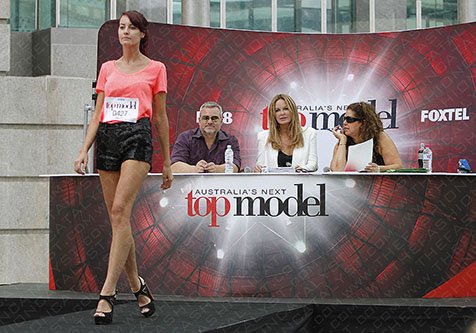 And as the second city of the ANTM national model scout took place, the stakes got a whole lot higher for the leggy model wannabe’s as Fox8 announced that ANTM will be partnering with the world’s number one modelling management firm, IMG Models.

Ivan Bart, SVP and Managing Director of IMG Models said, “Our participation further solidifies our commitment to nurturing the potential we see in the marketplace and together uncovering the world’s next supermodel.”

Renowned for some of the countries most promising models, Perth saw over 200 hopefuls hit the audition catwalk – with 21 of them going through to the next stage.

Set to air on Fox8 later this year, new host Jennifer Hawkins will be joined by judge duo, Charlotte Dawson and Alex Perry as they mentor and develop Australia’s next top model.

Behind The Scenes At Chanel Haute Couture Spring Summer 2013